​"I love being creatively diverse and experimental. I don't have a signature style. We live in an artistically derivative culture. I'd be lying if I said that other artists merely 'inspire' me."

Liz was born in Detroit Michigan, and raised in Bloomfield Hills by her mother Nancy, a housewife, and her father Tony, a doctor. Her parents divorced when Liz was eleven and she and her brother, Rick moved to their mother’s hometown, Toronto.
Her mother acquired a talent agency with her sister in- law called Trainco Talent.
Liz joined the roster, started acting classes, and did her first professional job at age twelve. She had to “cry on cue”, for the small film. (It wasn’t difficult to accomplish, as Liz’s father had passed away earlier that year).

After several years, and a few unmemorable roles in T.V. and film, Liz quit acting at the age of 19 and took a job as a casting assistant.

"I wasn’t a very good actor. I knew it would be a struggle and I wanted to build a career with security".

Liz opened her own company as a casting director at the age of seventeen. She had built a successful casting business then wanderlust took Liz to New York and Los Angeles to cast. After a couple of years, she returned to her favourite city, Toronto. Liz and Kim Everest founded Powerhouse Casting, a company that still thrives by new owners.

After years of casting film, television, and commercials, Liz became enamoured with the field of voice-over. She considered voice-over actors to be more relaxed and unconcerned with physical aesthetics. Plus, they made her laugh, appeared to have more free time than on-camera actors, and drove really nice cars.

She closed her casting company and returned to acting. This time, with anonymity.

She has been making a living exclusively as a voice over actor since 2002.

​​Liz has been an avid collector of original art for many years. In 2010, Liz and her husband, Zach Anderson, a casting director, moved into a home with high ceilings. There was far too much wall space too accommodate their small collection, nor did they have the budget required to fill those walls with work of artists they admired, like Monet.

That's when Liz taught herself how to paint.

For the first few years, she painted for herself and gifted art to her friends and family.

Then, word got out and she started doing commission work for interior designers and had several showings at some very important, yet unconventional places, like her doctor's office and sound studios. Then Liz had a showing at a major downtown Toronto Gallery, which she sold all of her work.

Liz still paints for her regular clients, and loves doing commission work. At present, she is working on her next show at The Peach Gallery for fall 2019.

Now Liz has expanded her imagination and her new start up, Liz Ramos Anderson Jewelry is underway!

“Designing and making jewelry is not only creatively fulfilling, but fun! And I get to work from my home studio. Using all the multi coloured gemstones is like being surrounded by “no–calorie candy”.  I’ve always loved jewelry and have bought or acquired so much over the years. Now it’s fun to make it, and also transform diamond and rare stone pieces into affordable costume jewelry”.

Liz and Zach no longer live in the house with high ceilings. They have a condo in downtown Toronto. They have been married for sixteen years. They are major homebodies, and (gratefully) child-free. “We have mad respect for parents…but, how do you do it??” 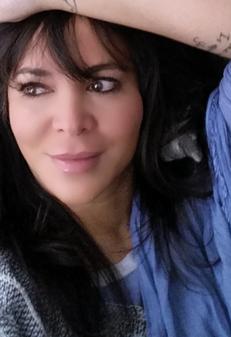